Penetration of light into living tissue

At some time or another in every young scientist's formative years, he or she has experimented by shining a flashlight through their fingers or, even more fun, up their own nose, to discover that the flashlight's white light not only penetrates through their appendages but also glows red on the other side, thus leading them to the conclusion that some light, but not all, can pass through tissue. Now our young scientist is older and more learned, and she understands that living tissues are a highly-complex, dynamic turbid medium, the optical properties of which are defined by varying rates of absorption, scattering, transmission and reflection. She also knows that different imaging techniques, such as optical coherence tomography (OCT), laser doppler flowmetry (LDF) and transmissive laser speckle imaging (TLSI), rely upon an understanding of these complex optical properties. Penetration of living tissue depends on parameters like wavelength, intensity, polarization and coherence of the light source, tissue compression and those of the tissues themselves, like pigmentation, fibrotic structure, hydration and composition, in addition to more obvious factors such as hair and clothes. (Thanks Peter for this elegant formulation!)

For many indications in laser phototherapy, a good penetration through tissue is an advantage.

Now, our young scientist already noticed that red light goes well through the tissue. But what happens then with the rest of the light – the blue, green and yellow parts? It absorbs by the tissue and is converted to heat energy. You can test this yourself: compare a red and green laser pointer of the same power, i.e. of 5 mW (legal in most countries) – the red light goes through your finger, the green does not. For infrared light we need an IR-tovisible converter that is enough sensitive for the wavelength used. This spectrum was recorded with a very sensitive spectrophotometer with the hand in close juxtaposition with the photocathode (unpublished data of Karl H. Norris, from The Science of Photobiology, KC Smith, ed., Plenum Press, 1977; p. 400). As can be seen, the best transmission through a hand is approximately between 670 nm and 910 nm and then from about 1050 nm and up. Original website:

Figure 1: The absorption spectrum of a human hand. 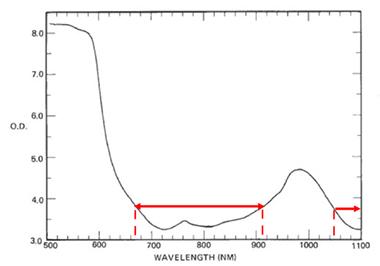 Figure 2: Another interesting diagram is the following. 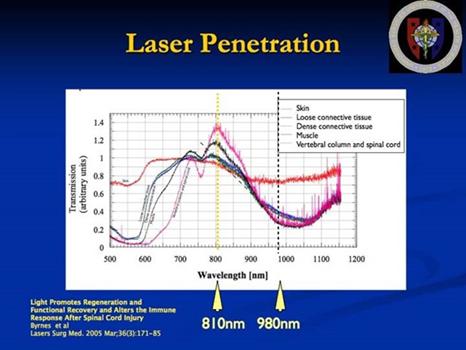 This coincides fairly well with the shown spectral transmission of a hand. In both cases we are using continuous (or switched) light. Conventional pulsing does not influence penetration.

The first barrier for the light is usually the skin. Transmission through skin has been investigated in several studies. Jan Bjordal and colleagues have summarised skin transmission with different lasers.

The most surprising part of this is that the GaAs differs so much from the other. What is so special with that wavelength – 904 nm? Nothing! It is not the wavelength, it is the extreme pulsing (super pulsing). Today it is possible to find GaAlAs-lasers with the 904 nm wavelength and then the energy loss due to the skin barrier is about 80%.

“In vivo trials with 904 nm pulse lasers, have demonstrated that these lasers achieve similar effects on collagen production with far lower doses on the animal´s skin than lasers with continuous output (Enwemeka 1991a; van der Veen and Lievens 2000). This effect can be attributed to the photobleaching phenomenon, where the first strong pulse bleaches the opaque barrier of tissue, letting the second pulse pass through the tissue barrier with less loss of energy (Kusnetzow et al. 2001), (Fig. 7).” This has further been studied by Jon Joensen and presented by himself at the WALT meeting, September, 2010 in Bergen, Norway. Figure 3 and 4. 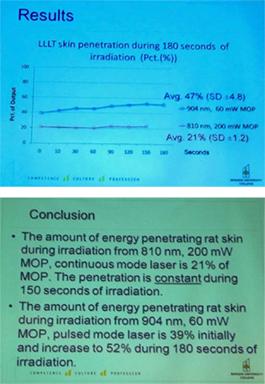 Strong light penetrates deeper than weak. However, twice the power does not mean twice as deep, but maybe 5-10% deeper. Let us say that a 100 mW laser, at 10 mm depth has certain intensity. If we drive the same laser harder so that it emits 200 mW, the mentioned certain intensity will be found on 10.5 – 11 mm depth and if we increase the power to 400 mW, the depth will increase to between 11 and 12 mm.

Another factor influencing the penetration is tissue compression – a probe that is mechanically pressed against the skin will force the blood in front to move away from the penetrating beam. Pigmentation can absorb a great deal of the incoming light.

The most important factors influencing light penetration in tissue are wavelength, super pulsing, power, intensity, tissue contact and compression. Other factors to consider are polarization and coherence. See e.g. L. Hode, The Importance of the Coherency. Photomedicine and Laser Surgery. Volume 23, Number 4, 2005, Pp. 431– 434