The following basic principles and parameters should be observed, as they are of great importance for laser therapy. The RJ laser devices fulfil the extensive requirements for successful laser therapy.

Each tissue has a special optical behaviour. The laser beam is reflected, scattered, absorbed and transmitted depending on the wavelength and tissue. With increasing depth the laser energy/power decreases and can be compensated by higher power or therapy duration.
Strong absorption and reflection takes place below 600 nm and above 950 nm, the tissue gets easily heated depending on the power. In case of using the LightStream (High Intensity Laser) you will experience that the "good" wavelenghts are producing sufficient heat. 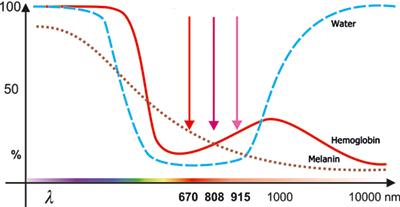 We studied the depth of penetration and the magnitude of attenuation of 632.8nm and 904nm light in skin, muscle, tendon, and cartilagenous tissues of live anaesthetized rabbits. Tissue specimens were dissected, prepared, and their thicknesses measured. Then, each wavelength of light was applied. Simultaneously, a power meter was used to detect and measure the amount of light transmitted through each tissue. All measurements were made in the dark to minimize interference from extraneous light sources. To determine the influence of pulse rate on beam attenuation, the 632.8nm light was used at two predetermined settings of the machine; continuous mode and 100 pulses per second (pps), at an on:off ratio of 1:1. Similarly, the 904nm infra-red light was applied using two predetermined machine settings: 292 pps and 2,336 pps. Multiple regression analysis of the data obtained showed significant positive correlations between tissue thickness and light attenuation (p < .001). Student's t-tests revealed that beam attenuation was significantly affected by wavelength. Collectively, our findings warrant the conclusions that (1) The calf muscles of the New Zealand white rabbit attenuates light in direct proportion to its thickness. In this tissue, light attenuation is not significantly affected by the overlying skin, a finding which may be applicable to other muscles. (2) The depth of penetration of a 632.8nm and 904nm light is not related to the average power of the light source. The depth of penetration is the same notwithstanding the average power of the light source. (3) Compared to the 904nm wavelength, 632.8nm light is attenuated more by muscle tissue, suggesting that is is absorbed more readily than the 904nm wavelength or conversely that the 904nm wavelength penetrates more. Thus, wavelength plays a critical role in the depth of penetration of light.

The selection and combination of the above mentioned wavelengths are the foundation for the success of the therapy. Biochemical reactions such as ATP synthesis (a major factor in cell stimulation) are triggered via absorption bands of cytochrome c-oxidase.
Biophysical reactions also take place, e.g. depending on the power and duration of therapy, gentle warming can take place.

The correct selection of the wavelength enables, among other things, shorter therapy times, since more energy is made available in the same time. The table on the left shows the better penetration depth (muscular system) of 808 nm versus 980 nm.
More informationen 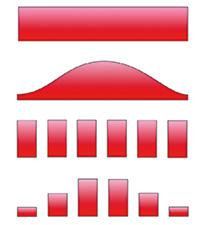 The modulation frequency of the laser is definitely an important contribution to the success of the therapy, therefore all bio frequencies are programmed in the LightStream (e.g. resonance frequencies according to Nogier, Bahr, Reininger, Scholtes).
Of course, the type of transmission, the pulse shape, is also important. The duty cycle of the pulse forms can be changed specifically. The biopulse is to be emphasized, which is quasi a "light massage", the power swells up and down.
In addition, the modulation also controls and optimizes the thermal behavior.

Wound healing with the Physiolaser 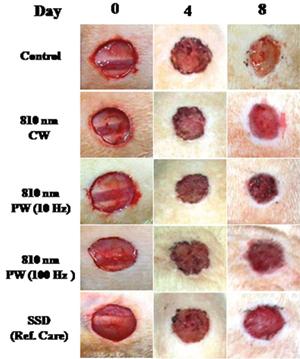 It was in the 1980s when T. Karu began to search for the photobiological "receiver" at the cellular level. In a series of excellent publications (most of which have been compiled into a book) she was able to prove that the main photo-acceptors are the enzymes of the respiratory chain in the mitochondria.

The stimulation of the respiratory chain

In order to understand exactly where the laser radiation intervenes, the processes in the respiratory chain are briefly explained:
The respiratory chain, also known as electron transport chain and oxidative phosphorylation, represents the last step in the human metabolism: The complex metabolites of our daily food, such as carbohydrates, lipids and proteins, are first broken down into their monomeric units, mainly glucose, fatty acids, glycerol and amino acids, and then into their common intermediate product, acetyl-coenzyme A (acetyl-CoA). In the citric acid cycle, acetyl-CoA is oxidized by O2 to CO2, while simultaneously reducing the coenzymes NAD+ and FAD to their high-energy intermediates NADH and FADH2. In the last part of this metabolism, called electron transport and oxidative phosphorylation, these energy-rich intermediates are reoxidized by O2, i.e. electrons are transferred from NADH or FADH2 to oxygen O2, which is reduced to H2O by this and by the uptake of 2 protons H+. The energy released in this process drives the synthesis of the energy-rich ATP from ADP by phosphorylation with Pi.

All these processes take place normally even in the dark and in every healthy cell. If such a cell is additionally irradiated with light, the enzyme complexes are supported in their redox process by the so-called photooxidation. Photooxidation is a process in which a donor molecule excited by light transfers an electron to an acceptor and is thereby oxidized, while the acceptor molecule involved is reduced. This process works because electrons are less strongly bound to the molecule in the excited state than in the ground state. The energy of absorbed photons is thus chemically transferred to the redox centres of the enzyme complexes of the respiratory chain, which makes the latter more easily oxidised or ionised, and increases the synthesis of ATP. At this point, this key point of the light-metabolism interaction should be clearly pointed out again. The term oxidation in chemistry, namely the release of electrons, is the same as ionization in physics, where an electron is also taken away from an atom or molecule. It is generally known that ionisation from an energy level excited (by light) is easier or more probable.

The dependence of light-stimulated ATP synthesis on the wavelength of the irradiated light is determined by the absorption properties (which change slightly in the oxidized or reduced state) of the individual components, the enzyme complexes, mainly cytochromes.

These data show that there are two groups of spectrally sensitive regions. One covers the near ultraviolet and visible blue wavelength range of about 350 - 450 nm, and the second covers the visible red and near infrared range of about 600 - 830 nm. With many such experiments with prokaryotic and eukaryotic cells T. Karu was able to show that in the blue wavelength range the flavoproteins (Fig. 5) of the reductases (dehydrogenases) and in the red wavelength range the semichinone form of the flavoproteins of the reductases (dehydrogenases) and the cytochrome a/a3 (Fig. 6) of the cytochrome c-oxidase are the light receptors. Such investigations are facilitated by the fact that it is a principle of photochemistry that an action spectrum always reflects the course of the absorption spectrum of the light-absorbing molecule.
In accordance with clinical experience, such investigations have shown that for maximum stimulation, not only the energy density must lie within a certain range, but also the power density and thus the irradiation time. It is particularly interesting that the optimum irradiation parameters given in the table correspond well with clinical experience.